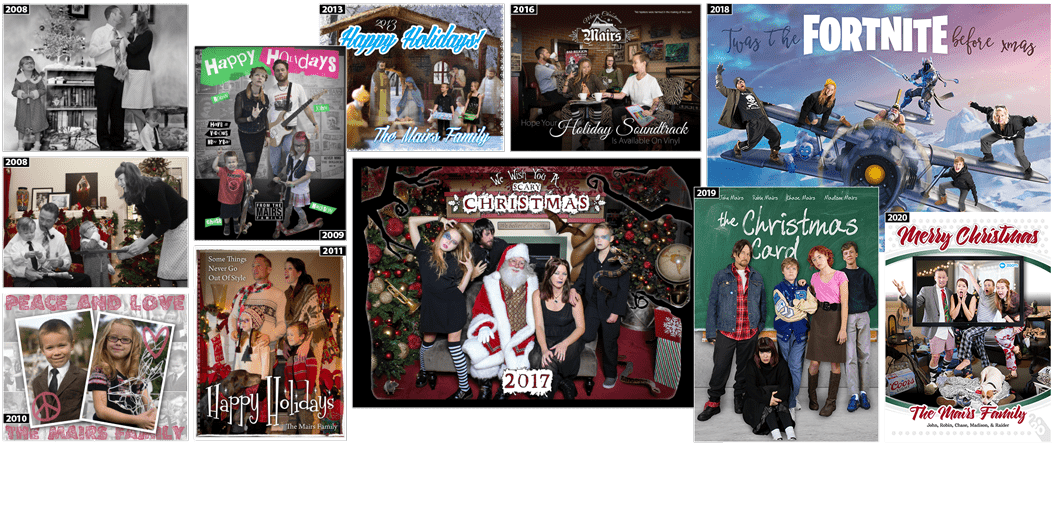 The first thing you need to do when creating a custom Christmas card for the family is to come up with a concept/theme. Each year we come up with ideas and then I work through them to determine if it is a theme we can pull off. The theme is usually pop-culture oriented, we want people to be able to relate to the card. Sometimes we choose a theme based on a popular movie or tv series, sometimes we poke fun at trends. This Christmas card was a jab at the popularity of Hipsters.

Granted, not all recipients of this card got our concept, but enough did (and we also just wanted to do it because we thought it would be fun). Most years my parents ask me to explain what’s going on in our Christmas card, but there’s fun in that too. Keep in mind, that if you decide to do a custom Christmas card, you will have to try to outdo yourself every year. We actually stopped doing the cards for a few years, but we started back up because of popular demand!

For this card, we mixed it up a little. Instead of shooting each of us separately in my garage with a homemade “green screen”, we decided to shoot on location. There were a couple things that were different with this scenario… instead of me taking the pictures (with a camera remote), we asked a friend to take the pictures. We started out by scouting some coffee shops here in our hometown San Clemente. When we found a coffee shop that was perfect for our theme and not too crowded, we asked the owners if they would allow us to come in and take some pictures (they said yes).

We searched our closets for things to wear, then we went on Amazon to buy things like temporary tattoos, necklaces, bracelets, and shirts. We got all of our props organized, then we headed over to the coffee shop and moved furniture around until we were ready. Usually I use a tripod, this ensures the lighting and perspective will be the same for each image, but this time our photographer was moving around (this made it harder to merge images in order to get the group photo we wanted). We take several pictures with different poses, expressions, and interactions.

Once we chose the image that would need the least amount of work, I go through the image and start masking out areas (in Photoshop) that I want to change. When you make a selection, you can clone or heal an image and it will keep you from altering any of the surrounding areas. My workflow changes as Photoshop comes out with new features. This card was created back in 2016, so if I were working on this now I might do things differently.

When I’m working on projects like this, I try to work in a non-destructive manner. That means I can reverse or get back to my original image at any given time. I do this by creating smart-object layers, adjustment layers, clone/heal layers, and an original background layer. Because the final image will have dozens of layers, the image size can get rather large.

Once the background is touched up, I can add in the replacement poses to fill the spaces I have erased. For instance, in this image I chose a side-view of myself drinking coffee to replace the original image of me looking toward the camera. I also changed the image of my wife Robin to an option that looks less annoyed and more relaxed. The red areas of the image designate the mask I created, this protects the original image as I layer on the new images in their own layers.

In the image above, the red designates the mask I have painted on the image I am adding. I’m compositing a new image with myself and Robin in it on top of the original image. I paint the mask to hide most of the image and let just the portions I want to use be unmasked. This is another example of how I can use a non destructive layer mask to preserve the original images. If I don’t like something, I can reverse directions at any given point.

I activated the “marching ants” in the above image to show where the clones/heals are. These are painted onto their own layer and they help to transition the patterns from each image so that you can’t see where they come together.

You can see the mask covering Madison, this isn’t on the main image, it is actually over the album cover and the shadow behind it. I painted the mask to cut out a portion of the album cover to make it appear as though it is behind Madison (it’s actually on a layer above Madison).

Almost finished, just some small additions to complete the Hipster look. I added some tattoo artwork onto it’s own layer, adjusting the positioning and opacity to help it blend well with the skin and shadows. I also masked in a top-knot of hair on top of Chase’s head from another image. In retrospect, I should have made the top-knot larger, more obvious. I’ve always concentrated on making my Photoshop work as un-obvious as possible, I never want people to be able to identify where I have worked on an image, I want my edits to be unseen. In a project like this, you need to switch gears, make the edits obvious to let people in on the joke. This is a parody and you should be able to identify the elements added so people can see them and have a chuckle.

The Merry Christmas illustration with our family name on it was edited in Illustrator. When added to Photoshop, this becomes a smart object that can be double clicked and edited. Another example of how to preserve editability so you can go back and make changes/adjustments as necessary.

The final image above includes a few text layers. We take turns trying to come up with a message or sentiment that will tie the card together. To really help explain the concept, we added the note at the top of the card stating that “No hipsters were harmed in the making”. This is something that could have been larger, to help sell the entire concept.

I love creating these cards every year. Not only is it a fun way to get creative, but it’s really fun to look back at all of the different versions. You can also see the progression of my Photoshop skills, some of the earlier cards don’t look as natural or realistic. The best part of doing these custom Christmas cards is the outtakes. I have a lot of images that don’t make the cut, images of the kids being funny and expressive, having a great time. One future card concept might be an outtake card that includes images from all the past years, I’ll probably do that once the kids have moved out and we don’t get to have our yearly photo shoot. 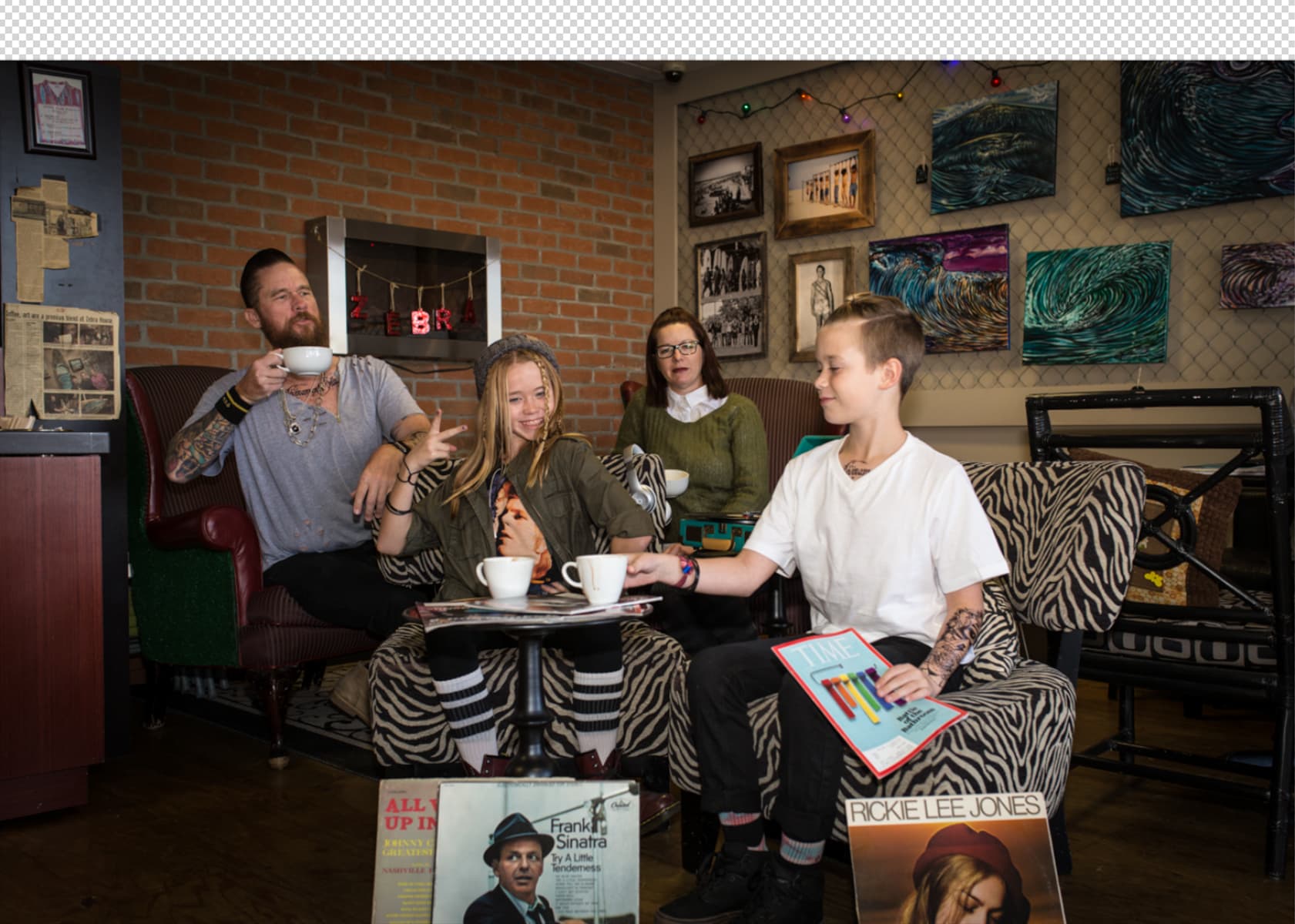 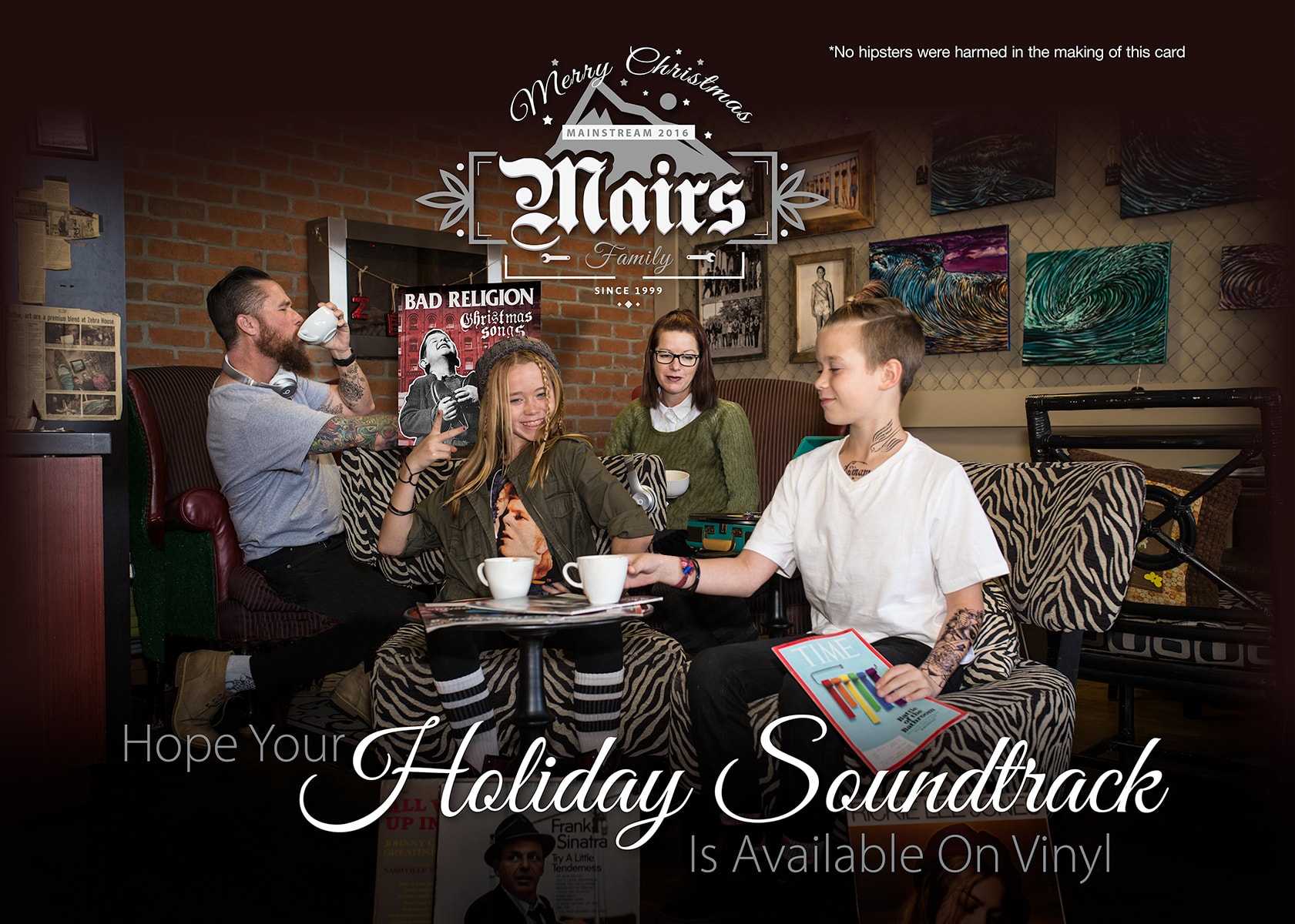